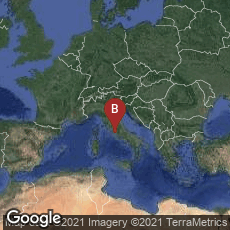 Possibly the Earliest Known Image of the Virgin Mary Possibly an image of Mary nursing the Infant Jesus, though this is disputed. 3rd century, Catacomb of Priscilla, Rome.

The earliest surviving Christian art is preserved on the walls of tombs belonging to wealthy Christians in the catacombs of Rome. From literary evidence there may also have been panel icons. However, like almost all paintings from classical times, these have disappeared. Possibly the earliest known image of the Virgin Mary independent of the Magi episode, is a fresco dated about 150 CE in the Catacomb of Priscilla on the Via Salaria in Rome that shows her nursing the infant Jesus on her lap.

"Initially Jesus was represented indirectly by pictogram symbols such as the Ichthys (fish), the peacock, or an anchor (the Labarum or Chi-Rho was a later development). Later personified symbols were used, including Jonah, whose three days in the belly of the whale pre-figured the interval between Christ's death and Resurrection; Daniel in the lion's den; or Orpheus charming the animals. The Tomb of the Julii has a famous but unique mosaic of Christ as Sol Invictus, a sun-god. The image of "The Good Shepherd", a beardless youth in pastoral scenes collecting sheep, was the commonest of these images, and was probably not understood as a portrait of the historical Jesus at this period. It continues the classical Kriophoros, and in some cases may also represent the Shepherd of Hermas, a popular Christian literary work of the 2nd century.

"Among the earliest depictions clearly intended to directly represent Jesus himself are many showing him as a baby, usually held by his mother, especially in the Adoration of the Magi, seen as the first theophany, or display of the incarnate Christ to the world at large" (Wikipedia article on Depiction of Jesus, accessed 10-03-2010).

Situated in what was a quarry in Roman times, the Catacombs of Priscilla were used for underground Christian burials from the late second century through the fourth century. The catacombs extend for roughly 13 kilometers on several levels.

"Some of the walls and ceilings display fine decorations illustrating Biblical scenes. The Catacombs of Priscilla are believed to be named after Priscilla, a member of the gens Acilia and who was probably the wife of the Consul Acilius who became a Christian and was killed on the orders of Domitian. They contain a number of wall paintings of saints and early Christian symbols. Particularly notable is the 'Greek Chapel' (Capella Greca), a square chamber with an arch which contains second century frescoes generally interpreted to be Old and New Testament scenes, including the Fractio Panis. Above the apse is a Last Judgment. New, and somewhat controversial research has begun to suggest that the scenes traditionally interpreted as the deuterocanonical story of Susannah (Dn 13) may actually be scenes from the life of a prestigious Christian woman of the second century AD. Near this are figures of the Madonna and Child and the Prophet Isaiah, also dating from the second century" (Wikipedia article on Catacomb of Priscilla, accessed 10-02-2010).