Sixteenth century woodcut showing a Counting board. The lines and the spaces between the lines function like the wires or rods on an abacus. The place value is marked at the end. 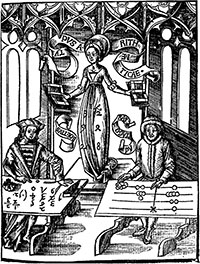 The European table abacus or reckoning table became standardized to some extent by the end of the 13th century. The pebbles previously used as counters were replaced by specially minted coin-like objects that were cast, thrown, or pushed on the abacus table. They were called jetons from jeter (to throw) in France, and werpgeld for “thrown money” in Holland.