scrinium or capsa receptacle for carrying a number of papyrus rolls from one place to another. 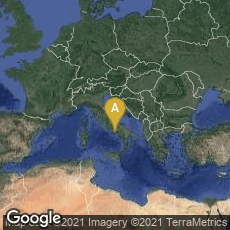 The Characteristics of Roman Papyrus Rolls "The length and width of the roll depended on the taste or convenience of the writer. The contents were written in columns, the lines of which ran parallel to the long dimension, and the reader, holding the roll in both hands, rolled up the part he had finished with his left hand, and unrolled the unread portion with his right. This way of dealing with the roll is well shewn in the accompanying illustration (fig. 9) reduced from a fresco at Pompeii. In most examples the two halves of the roll are turned inwards, as for instance in the well-known statue of Demosthenes in the Vatican. The end of the roll was fastened to a stick (usually referred to as umbilicus or umbilici). . . .

"These sticks were sometimes painted or gilt, and furnished with projecting knobs (cornua) similarly decorated, intended to serve both as an ornament, and as a contrivance to keep the ends of the roll even, while it was being rolled up. The sides of the long dimension of the roll (frontes) were carefully cut, so as to be perfectly symmetical, and afterwards smoothed with pumice-stone and coloured. A ticket (index or titulus, in Greek ... [sillubos or sittubos]), made of a piece of papyrus or parchment, was fastened to the edge of the roll in such a way that it hung out over one or the of the ends. . . . 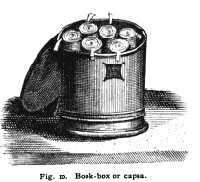 "The roll was kept closed by strings or straps (lora), usually of some bright colour; and if it was specially precious, an envelope, which the Greeks called a jacket (. . . [dipthera]), made of parchment or some other substance, was provided. . . .

"When the number of rolls had to be carried from one place to another, they were put into a box (scrinium or capsa). This receptacle was cylindrical in shape, not unlike a modern hat-box. It was usually carried by a flexible handle, attached to a ring on each side; and the lid was held down by what looks very like a modern lock. The eighteen rolls, found in a bundle at Herculaneum, had doubtless been kept in a similar receptacle..

"My illustration (fig. 10) is from a fresco at Herculaneum. It will be noticed that each roll is furnished with a ticket (index or titulus). At the feet of the statue of Demosthenes already referred to, and that of Sophocles in the Lateran, are capsae, both shewing the flexible handles" (Clark, The Care of Books [1901] 20-35).