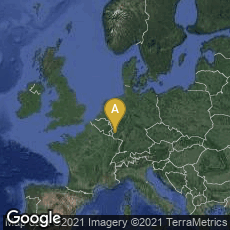 ". . . three of the words applied to contrivances used [by the Romans] to keep books in, namely, nidus, forulus, and loculamentum, may be rendered by the English 'pigeon-hole'; and that pegma and pluteus mean contrivances of wood which may be rendered by the English 'shelving.' It is quite clear that pegmata could be run up with great rapidity, from a very graphic account in Cicero's letters of the rearrangement of his library. He begins by writing to his friend Atticus as follows:

" 'I wish you would send me any two fellows out of your library, for Tyrannio to make use of as pasters, and assistants in other matters. Remind them to bring some vellum with them to make those titles (indices) which you Greeks, I believe call silluboi. You are not to do this it is inconvenient to you. . . .'

"In the next letter he says:

" 'Your men have made my library gay with their carpentry-work, and their titles (constructione et sullybis). I wish you would commend them.'

"When all is complete he writes:

" 'Now that Tyrannio has arranged my books, a new spirit has been infused into my house. In this matter the help of your men Dionysius and Menophilus has been invaluable. Nothing could look neater than those shelves of yours (illa tua pegmata), since they smartened up my books with their titles.'

"No other words than those I have been discussing are, so far as I know, applied by the best writers to the storage of books; and, and after a careful study of the passages in which they occur, I conclude that, so long as rolls only had to be accomdated, private libraries in Rome were fitted with rows of shelves standing against the walls (plutei), or fixed to them (pegmata). The space between these horizontal shelves was subdivided by vertical divisions into pigeon-holes (nidi, foruli, loculamenta), and it may be conjectured that the width of these pigeon-holes would vary in accordance with the number of rolls included in a single work. That such receptacles were the common furniture of a library is proved, I think, by such evidence as the epigram of Martial quoted above, in which he tells his friend that he will accept his poems, he may 'put them even in the lowest pigeon-hole (nido vel imo),' as we would say, 'on the bottom shelf'; and by the language of Seneca when he sneers at the 'pigeon-holes (loculamenta) carried up to the ceiling.'

"The height of the woodwork varied, of course, with individual taste. In the library on the Esquiline the height was only three feet six inches; at Herculaneum about six feet.

"I can find no hint of any doors, or curtains, in front of the pigeon-holes. That the ends of the rolls (frontes) were visible, is, I think, quite clear from what Cicero says of his own library after the construction of the shelves (pegmata); and the various devices for making rolls attractive seem to me to prove that they were intended to be seen.

"A representation of rolls arranged on the system which I have attempted to describe occurs on a piece of sculpture (fig. 11) found at Neumagen, near Trèves [Neumagen-Dhron] in the seventeenth century, among the ruins of a fortified camp attributed to Constantine the Great. Two divisions, full of rolls, are shewn, into one of which a man, presumably the librarian, is replacing one. The ends of the rolls are furnished with tickets" (Clark, The Care of Books [1901] 35-37.)