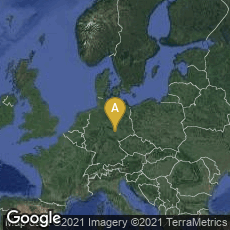 The Nebra Sky Disk, attributed to a site near Nebra, Saxony-Anhalt, Germany, is a bronze disk about 30 cm in diameter, with a blue-green patina inlaid with gold symbols which have generally been interpreted as a sun or full moon, a lunar crescent, and stars, including a cluster interpreted as the Pleiades. The disk is associated with Bronze Age Unetice Culture.

"Two golden arcs along the sides, making the angle between the solstices, were added later. A final addition was another arc at the bottom surrounded with multiple strokes (of uncertain meaning, variously interpreted as a Solar Barge with numerous oars, as the Milky Way or as a rainbow)" (Wikipedia article on Nebra sky disk, accessed 11-04-2010).

When it appeared on the antiquities market in 2001 the disk was widely suspected to be a forgery. Scientific research summarized in the Wikipedia article provided evidence for its authenticity that was widely accepted in 2010.

In January 2021 an article by Becky Ferreira in The New York Times reported about ongoing disputes over the date of this object.