Surviving part of A (ll. 46-93). Oxford fragment of the Parian Marble, perserved in Oxford since 1667. Ashmolean Museum. 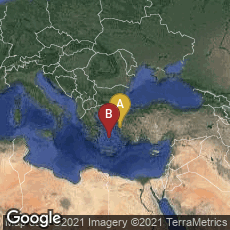 A: İzmir, Turkey, B: Paros, Greece

The Earliest Surviving Example of a Greek Chronological Table

The earliest surviving example of a Greek chronological table, the Parian Marble (Marmor Parium) or Parian Chronicle, covers the years from 1581 BCE to 299/8 BCE, inscribed on a marble stele, of which two fragments are known. The first fragment was found on the island of Páros in two sections, and sold in Smyrna in the early 17th century to an agent for Thomas Howard, Earl of Arundel. This inscription (ll. 1-45) was deciphered by the antiquarian John Selden and published among the Arundel Marbles, in Marmora Arundelliana (London, 1628-9) nos. 1-21, 59-119. The upper part of the first fragment (A) was later lost and is known only from the transcription published by Selden. The surviving portion of A (ll. 46-93) is preserved in the Ashmolean Museum, Oxford. A third fragment of Marmor Parium (B), comprising the base of the stele and containing the end of the text (ll. 101-133) with entries from 356-299/98 BCE, was found on Páros in 1897, and is preserved in a museum on that island.

The compiler of the chronology is unknown, but the date of composition can be fixed at 264/3 BCE because of the mention of the name of the Athenian archon Diognetus (l.3) who served during those years. The chronology  includes a list of events from the reign of the mythical king Cecrops to the archonship of Euctemon, with its main focus on Athenian history. Events are arranged in paragraphs which include a short description of the event, the name of the Athenian king or archon, and the number of years elapsing from 264/3 BC expressed in Attic or acrophonic numerals

"It combines dates for events we would consider mythic, such as the Flood of Deucalion (equivalent to 1528/27 BC) with dates we would categorize as historic. For the Greeks, the events of their distant past, such as the Trojan War (dated to 1218 in the Parian inscription) and the Voyage of the Argonauts were historic: their myths were understood as legends to the Greeks. In fact the Parian inscriptions spend more detail on the Heroic Age than on certifiably historic events closer to the date the stele was inscribed and erected, apparently in 264/263 BC. 'The Parian Marble uses chronological specificity as a guarantee of truth,' Peter Green observed in the introduction to his annotated translation of the Argonautica of Apollonios Rhodios: 'the mythic past was rooted in historical time, its legends treated as fact, its heroic protagonists seen as links between the 'age of origins' and the mortal, everyday world that succeeded it' "(Wikipedia article on Parian Chronicle, accessed 11-22-2010).

In December 2014 the Department of Digital Humanities at the University of Leipzig was in the process of producing a Digital Marmor Parium at this link.