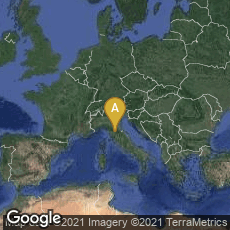 When De re aeficatoria first appeared in print in Florence at the press of Nicolaus Laurentii, Alamanus on December 29, 1485 it was the first printed book on architecture. It was followed in 1486-87 by the first printed edition of Vitruvius.  The first printed edition of Alberti's work was edited by Alberti's brother, Bernardus. It also contained Politianus, Epistola ad Laurentium Medicem, and Baptista Siculus, Carmen ad lectorem. ISTC no.  ia00215000. MS Laurentiana 89 sup. 113 was used (among others) as printer's copy; Leon Battista Alberti. La biblioteca di un umanista' [catalogue of an exhibition at the BML Firenze], Firenze [2005] no. 54.

No illustrated edition of De re aedificatoria appeared until 1550 when the translation into Italian by Italian diplomat, mathematician, philologist, and humanist Cosimo Bartoli was published in Florence by the Dutch-Italian humanist, typographer and printer Lorenzo Torrentino.

Printing by Handpress or by Hand
Architecture / Design