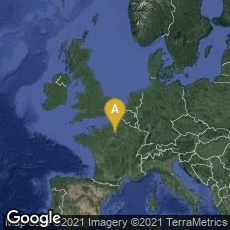 The First Building in the Gothic Style 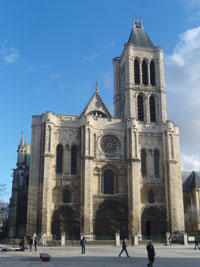 On June 14, 1144 Frankish abbot-statesmen and historian Abbot Suger, friend and confidante of French Kings Louis VI and Louis VII, dedicated the rebuilt Abbey of Saint Denis. This building is often cited by historians as the first major structure of which a substantial part was designed and built in the Gothic style. Both stylistically and structurally it heralded the change from Romanesque architecture to Gothic architecture. Before the term "Gothic" came into common use, it was known as the "French Style" (Opus Francigenum).

"Suger began with the West front, reconstructing the original Carolingian façade with its single door. He designed the façade of Saint-Denis to be an echo of the Roman Arch of Constantine with its three-part division and three large portals to ease the problem of congestion. The rose window is the earliest-known example above the West portal in France.

"At the completion of the west front in 1140, Abbot Suger moved on to the reconstruction of the eastern end, leaving the Carolingian nave in use. He designed a choir (chancel) that would be suffused with light. To achieve his aims, his masons drew on the several new features which evolved or had been introduced to Romanesque architecture, the pointed arch, the ribbed vault, the ambulatory with radiating chapels, the clustered columns supporting ribs springing in different directions and the flying buttresses which enabled the insertion of large clerestory windows " (Wikipedia article on Gothic architecture, accessed 11-24-2010).