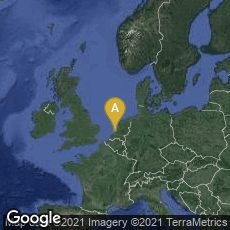 Leiden University Library in 1610. Engraving by Woudanus in Stedeboeck der Nederlanden, Amsterdam: Willem Blaeu, 1649. Notice the way the library is arranged by subject.

In 1610 bookseller and publisher Andries Cloucq published a series of four large prints depicting the main buildings and halls of Leiden University: the anatomy theatre, the library, the botanical garden and the fencing school. The prints were engraved by Willem van Swanenburg after drawings by the Leiden artist Jan Cornelis van't Woudt (Woudanus).

Most relevant to this database is the famous print of the interior of the library, of which the Wikipedia reproduces a hand-colored copy from a version published in Stedboeck der Nederlanden (Amsterdam: Willem Blaeu, 1649).

"The bookcases were evidently contrived with the view of getting the largest number possible into the room. Each contained a single row of books, chained to a bar in front of the shelf; and, also for the purpose of saving the space usually occupied by a seat, readers were obliged to consult them standing. There are eleven bookcases on each sie of the room, each containing from 40 to 48 volumes. At the end of the room are two cupboards, probably for manuscripts; and to the right of the spectator is a third press marked Legatum Josephi Scaligeri. He died in January, 1609. Further, as an illustration of the usual appliances for study found in libraries at this period, and often mentioned in catalogues and account-books, I should draw attention to the globes and maps."