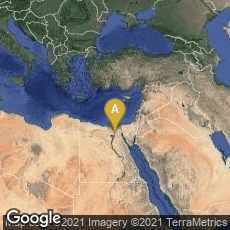 The Berlin Papyrus 6619, One of the Earliest Medical and Mathematical Documents The Berlin Papyrus 6619, commonly known as the Berlin Papyrus, an ancient Egyptian papyrus document from the Middle Kingdom, was found at the ancient burial ground of Saqqara in the early 19th century CE.

"The papyrus is one of the primary sources of ancient Egyptian mathematical and medical knowledge, including the first known documentation concerning pregnancy test procedures, and is thus part of the medical papyri.

"The Berlin Papyrus contains a problem stated as "the area of a square of 100 is equal to that of two smaller squares. The side of one is ½ + ¼ the side of the other."[4] The interest in the question may suggest some knowledge of the Pythagorean theorem, though the papyrus only shows a straightforward solution to a single second degree equations in one unknown. In modern terms, the simultaneous equations x2 + y2 = 100 and x = (3/4)y reduce to the single equation in y: ((3/4)y)2 + y2 = 100, giving the solution y = 8 and x = 6" (Wikipedia article on Berlin Papyrus, accessed 12-29-2010).