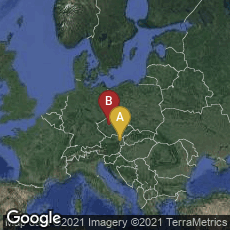 Giuseppe Arcimboldo Paints a Surrealist Portrait of the Librarian In 1566 Italian painter Giuseppe Arcimboldo, court portraitist to Holy Roman Emperor Ferdinand I at the Habsburg court in Vienna, and later, to Maximilian II and his son Rudolf II at the court in Prague, painted The Librarian as part of a series of portraits in which a collection of objects—in this instance books—form a recognizable likeness in semi-human form of the portrait subject. In The Librarian, Arcimboldo used objects that signified the book culture at that time. Animal tails, which became the beard of the portrait, were used as dusters.

This painting, preserved at Skokloster Castle, Sweden, is, like others from Arcimbaldo's series, often interpretted as an expression of the Renaissance fascination with riddles, puzzles, and the bizarre.

"The bizarre works of Arcimboldo, especially his multiple images, were rediscovered in the early 20th century by Surrealist artists like Salvador Dalí. The exhibition entitled “The Arcimboldo Effect” at the Palazzo Grassi in Venice (1987) included numerous 'double meaning' paintings. Arcimboldo's influence can also be seen in the work of Shigeo Fukuda, István Orosz, Octavio Ocampo, and Sandro del Prete, as well as the films of Jan Švankmajer" (Wikipedia article on Giuseppe Arcimboldo, accessed 01-02-2011).