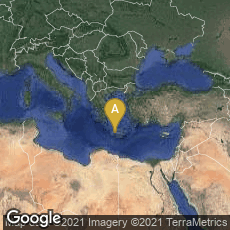 Whether or not pre-modern humans made the journeys deliberately or were washed ashore by accident, the finding in 2010, by Thomas F. Strasser and Eleni Panagapoulou, of Lower Palaeolithic flint handaxes, cleavers, and scrapers dating from at least 130,000 BCE at nine sites near the town of Plakias on Crete shows that early humans travelled out of Africa by sea much earlier than had previously been estimated. Some of these stone tools could be significantly older than circa 130,000 BCE since they resemble hand axes fashioned in Africa circa 800,000 BCE by early hominins.

"The cliffs and caves above the shore, the researchers said, have been uplifted by tectonic forces where the African plate goes under and pushes up the European plate. The exposed uplifted layers represent the sequence of geologic periods that have been well studied and dated, in some cases correlated to established dates of glacial and interglacial periods of the most recent ice age. In addition, the team analyzed the layer bearing the tools and determined that the soil had been on the surface 130,000 to 190,000 years ago.

"Dr. Runnels said he considered this a minimum age for the tools themselves. They include not only quartz hand axes, but also cleavers and scrapers, all of which are in the Acheulean style. The tools could have been made millenniums before they became, as it were, frozen in time in the Cretan cliffs, the archaeologists said. Dr. Runnels suggested that the tools could be at least twice as old as the geologic layers. Dr. Strasser said they could be as much as 700,000 years old. Further explorations are planned this summer. The 130,000-year date would put the discovery in a time when Homo sapiens had already evolved in Africa, sometime after 200,000 years ago. Their presence in Europe did not become apparent until about 50,000 years ago.

"Archaeologists can only speculate about who the toolmakers were. One hundred and thirty thousand years ago, modern humans shared the world with other hominids, like Neanderthals and Homo heidelbergensis. The Acheulean culture is thought to have started with Homo erectus.

"The standard hypothesis had been that Acheulean toolmakers reached Europe and Asia via the Middle East, passing mainly through what is now Turkey into the Balkans. The new finds suggest that their dispersals were not confined to land routes. They may lend credibility to proposals of migrations from Africa across the Strait of Gibraltar to Spain. Crete’s southern shore where the tools were found is 200 miles from North Africa.

“ 'We can’t say the toolmakers came 200 miles from Libya,' Dr. Strasser said. 'If you’re on a raft, that’s a long voyage, but they might have come from the European mainland by way of shorter crossings through Greek islands.'

"But archaeologists and experts on early nautical history said the discovery appeared to show that these surprisingly ancient mariners had craft sturdier and more reliable than rafts. They also must have had the cognitive ability to conceive and carry out repeated water crossing over great distances in order to establish sustainable populations producing an abundance of stone artifacts" (http://www.nytimes.com/2010/02/16/science/16archeo.html, accessed 01-06-2011).