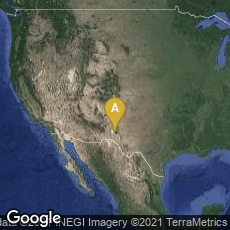 "The bottom panel shows the sky coverage of the final SDSS imaging survey, including data from SDSS I, II, and III.

"SDSS imaging covered slightly more than 1/3 of the sky, concentrated in the northern and southern Galactic caps (above and below the plane of the galaxy). In this image, stripes are radiating out from these caps; these stripes are areas imaged by the SEGUE survey, extending toward the plane of the Milky Way. Each orange dot in this map is a galaxy.

"The sequence of zooms in the upper panels zeroes in on the star-forming nebula NGC 604 in the nearby (2.5 million light years) galaxy Messier 33. In all, the SDSS imaging map shown here contains more than a trillion pixels, each one imaged in five colors" (https://classic.sdss.org/includes/sideimages/orangespider.html, accessed 9-2020).

The Sloan Digital Sky Survey-III (SDSS-III), a major multi-filter imaging and spectroscopic redshift survey using a dedicated 2.5-m wide-angle optical telescope at Apache Point Observatory, Sunspot, New Mexico, released the largest digital color image of the sky assembled from millions of 2.8 megapixel images, and consisting of more than a trillion pixels. This may be the largest digital image produced to date.