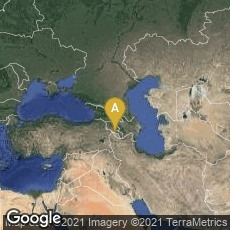 Image Source: www.nationalgeographic.com
An apparent wine press (in front of sign) and fermentation vat (right) emerge during a dig in Armenia. Photo by Gregory Areshian.

Between 2007 and September 2010 archaeologists found the earliest known wine press for stomping grapes, fermentation and storage vessels, drinking cups, and withered grape vines, skins and seeds--the earliest, most reliable evidence of wine production--in the Areni-1 cave near the village of Areni, Armenia.

"The cave has also offered surprising new insights into the origins of modern civilizations, such as evidence of a wine-making enterprise and an array of culturally diverse pottery. Excavations also yielded an extensive array of Copper Age artifacts dating to between 6,200 and 5,900 years ago. The new discoveries within the cave move early bronze-age cultural activity in Armenia back by about 800 years. Additional discoveries at the site include metal knives, seeds from more than 30 types of fruit, remains of dozens of cereal species, rope, cloth, straw, grass, reeds and dried grapes and prunes.

"In January 2011 archaeologists announced the discovery of the earliest known winery, seven months after the world's oldest leather shoe, the Areni-1 shoe, was discovered in the same cave. The winery, which is over six-thousand years old, contains a wine press, fermentation vats, jars, and cups. Archaeologists also found grape seeds and vines of the species Vitis vinifera. Patrick McGovern, a biomolecular anthropologist at the University of Pennsylvania, commenting on the importance of the find, said, 'The fact that winemaking was already so well developed in 4000 BC suggests that the technology probably goes back much earlier' " (Wikipedia article on Areni, accessed 01-16-2011).

An image of the "wine press" and "fermentation vat" found at Areni was illustrated in the following article in National Geographic News: http://news.nationalgeographic.com/news/2011/01/110111-oldest-wine-press-making-winery-armenia-science-ucla/, accessed 01-16-2011)