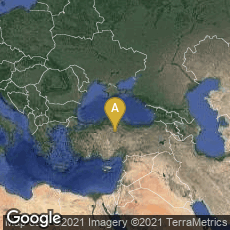 "Each entry begins by giving the number of tablets that made up the work being recorded, just as modern catalogues give the number of volumes in a mult-volume publication. The entry identifies the work itself by giving the title, which may take the form of citing its first line, or by giving a capsule description of the contents. Then it tells whether the table marked the end of the work or not. At times the entry includes the name of the author or authors, or adds other useful information. . . .

"In addition to noting missing tablets, the entries now and then provide information about shelving. There is an entry, for example, which in listing a work that happens to be in two tablets notes that 'they do not stand upright'; presumably, in the part of the palace holdings represented by this catalogue, most tablets were stored on edge while these two, exceptionally, lay flat. . . . The catalogue, it would seem, was of one particular collection that, to judge from the contents, was for use by the palace clergy. It would have been an invaluable tool: any priest who needed a ritual for a given problem, instead of picking up tablet after tablet to read the colophon if there was one, or some lines of text if there was not, had only to run an eye over the entries in the catalogue. It was a limited tool; the order of the entries is more or less haphazard (alphabetization, for example, lay over a millennium and a half in the future) and they give no indication of location. But it was, no question about it, a significant step beyond the simple listing of titles of the Nippur tablets.

"The finds at Hattusas, in short, reveal the development of procedures for organizing a collection of writings. The palace holdings were certainly extensive enough to require them; the catalogue alone, representing as we have seen, just the clergy's working library, lists well over one hundred titles. . . ." (Casson, Libraries in the Ancient World [2001] 5-8).