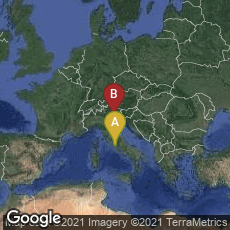 Table of contents listing recipes from the copy of the Venice, 1475 edition of Platina in the Bayerische Staatsbibliothek.

The first two editions of De honesta voluptate et valetudine by Italian humanist and papal librarian Bartholomeo Platina (Sacchi) appeared at roughly the same time. One was issued in Venice by Laurentius de Aquila and Sibylinus Umber on June 13, 1475. (ISTC No.: ip00762000). Another edition, which is sometimes called the first, might be slightly earlier or later. Neither the place, nor the printer, nor the date of printing is identified on that edition, but the Incunabula Short Title Catalogue No.: ip00761000 assigns the work to Ultrich Han of Rome between the years 1475 and 1479.

Platina credited the origin of most of the recipes in this work to the professional chef Maestro Martino of Como.