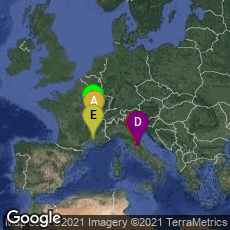 The Vatican Archives Follow the Movements of the Pope "The archives remained in Avignon during the time of the Great Schism. Once the difficulties were resolved, Martin V (1427-1431) had the records transported by boat and wagon to Rome, where they were temporarily housed in S. Maria Sopra Minerva then established in his family palace (Colonna) in central Rome. Though important historical records were returned to Rome at this time, including the Vatican Registers, the Avignon material, the paper registers known as the Avignon Registers, were not incorporated into the ASV until 1783" (Blouin, Jr., Vatican Archives: An Inventory and Guide. . . [1998] xviii).