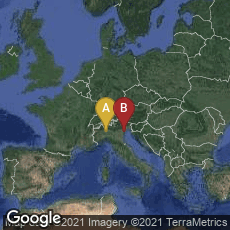 Pomponius Mela's Cosmographia, the Only Formal Roman Treatise on Geography On September 25, 1471 printer Antonius Zarotus (Antonio Zaroto), "with the material of Pamfilo Castaldi," issued from Milan, Italy, Cosmographia, sive De situ orbis by the Roman geographer Pomponius Mela. Pomponius Mela's text, of which this was the first printed edition, was the only surviving formal treatise on geography by a Roman author. It was widely copied and used during the Middle Ages. Nine printed editions appeared during the 15th century. The first printed edition is cited in the ISTC as No. im00447000.

Printer Zarotus worked as foreman for the Milanese prototypographer Pamfilo (Panfilo, Pamphilo) Castaldi in 1471, before entering into partnership with Gabriel de Ossonibus and others in May 1472. The surviving contract, published in 1745 in Milan by Giuseppe Antonio Sassi (Saxius) in his Historia literario-typographica Mediolanensis, is one of the most detailed records of such an arrangement so early in the printing business.