Main schema of Gray's first patent in the series. This patent was titled "Art of Telegraphy. Elements of this patent are identical to his second patent, which was the first of his patents to use the name Telautograph to identify the invention. 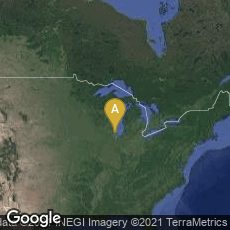 Main schema of Gray's second patent on the Teleautograph, but the first to use that specific name. Issued on the same day as the first patent, this patent was extremely detailed and included 12 schematics. The two patents are nearly identical, but contain small differences.

Inventor Elisha Gray of Highland Park, Illinois received the first of six patents for the Telautograph, an early precursor of the fax machine.

The telautograph transmitted electrical impulses recorded by potentiometers at the sending station to servomechanisms attached to a pen at the receiving station, reproducing a drawing or signature made by the sender at the receiving station.  It was the first device to transmit drawings to a stationary sheet of paper; previous inventions in Europe had used rotating drums to record these transmissions.

"By my invention you can sit down in your office in Chicago, take a pencil in your hand, write a message to me, and as your pencil moves, a pencil here in my laboratory moves simultaneously, and forms the same letters and words in the same way. What you write in Chicago is instantly reproduced here in fac-simile. You may write in any language, use a code or cipher, no matter, a fac-simile is produced here. If you want to draw a picture it is the same, the picture is reproduced here. The artist of your newspaper can, by this device, telegraph his pictures of a railway wreck or other occurrences just as a reporter telegraphs his description in words. The telautograph became very popular for the transmission of signatures over a distance, and in banks and large hospitals to ensure that doctors' orders and patient information were transmitted quickly and accurately" (quoted in Wikipedia article on Telautograph, accessed 03-02-2011).

Gray's patents on the telautograph are: