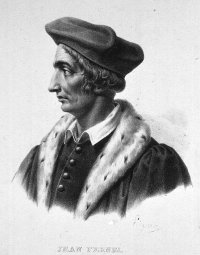 "I suppose that, for our purpose, Galen “On the Use of the Parts” (περι χρεας μορίων) may be taken to be the earliest separate treatise dealing with human physiology. For more than thirteen centuries it found no successor. The attempt to fill such a gap must have required both a conviction and a certain courage. The man who ventured was Jean Fernel. He called his book 'The Natural Part of Medicine', and issued it in Paris in the year 1542. He was already eminent as a physician, and greatly occupied in practice and in teaching. The book was, as was Galen’s, a physiology contributory to medicine. It had an immediate vogue. It met a need. Fernel had judged rightly in thinking there was room for it. His treatise was issued again and again, in Venice and Lyons as well as in Paris. He changed its name to 'Physiology'. For more than a century it remained the treatise on its subject. Harvey’s discovery of the circulation of the blood in the following century, on becoming generally accepted, at last put Fernel’s treatise out of date. But the compendious name, 'physiology', which he had given to the subject, has continued in use ever since" (Sherrington, The Endeavour of Jean Fernel [1946] 1).