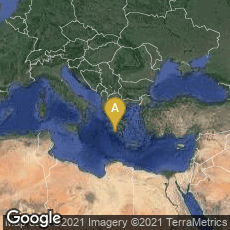 Written in Linear B Script, One of the Earliest Known Examples of Writing in Europe The tablet written in Linear B script is only 2 inches by 3 inches, and includes a list of names alongside numbers. Photo by Christian Mundigler.

On April 2, 2011 Michael Cosmopoulos of the University of Missouri-St. Louis reported the discovery at Ilaina, Greece of a clay tablet written in Linear B script. This tablet, 2 x 3 inches in size, was preserved when someone discarded it in a trash pit, burned the trash, and inadvertently fired the clay.

When the tablet was discovered it was the one of the earliest examples of writing found on the mainland of Europe.