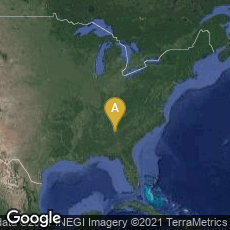 Thornwell Jacobs Seals the Crypt of Civilization; it Includes More than 640,000 Pages on Microfilm Thornwell Jacobs posed next to a photograph of the contents of the interior of the Crypt of Civilization.

On May 25, 1940 Presbyterian minister and president of Oglethorpe University in Brookhaven, Georgia, Thornwell Jacobs sealed the Oglethorpe Atlanta Crypt of Civilization in a cermony broadcast on Atlanta's WSB radio. It was intended to be opened on May 28, 8113 CE.

Modelled after a chamber in an Egyptian pyramid, the Crypt of Civilization was a subterranean chamber, twenty feet long, ten feet wide, and ten feet high. Among the many elements of the time capsule were microfilm media (film and thin metal) used to store written information, recorded sound, and moving pictures in the capsule. Apparently little or no print on paper material was included even though by the time of the creation of the capsule there was already sufficient evidence that print on paper, or writing on parchment, had survived for several thousand years, while microfilm or microform media was new and untested for durability.

"In this room had been a swimming pool, the foundation of which was impervious to water. The floor was raised with concrete with a heavy layer of damp proofing applied. The gallery's extended granite walls were lined with vitreous porcelain enamel embedded in pitch. The crypt had a two-foot thick stone floor and a stone roof seven feet thick. Jacobs consulted the Bureau of Standards in Washington for technical advice for storing the contents of the crypt. Inside would be sealed stainless steel receptacles with glass linings, filled with the inert gas of nitrogen to prevent oxidation or the aging process. A stainless steel door would seal the crypt."

"Articles on the crypt in the New York Times caught the attention of Thomas Kimmwood Peters (1884-1973), an inventor and photographer of versatile experience. Peters had been the only newsreel photographer to film the San Francisco earthquake of 1906. He had worked at Karnak and Luxor, Peters was also the inventor of the first microfilm camera using 35 millimeter film to photograph documents. In 1937 Jacobs appointed Peters as archivist of the crypt."

"From 1937 to 1940, Peters and a staff of student assistants conducted an ambitious microfilming project. The cellulose acetate base film would be placed in hermetically sealed receptacles. Peters believed, based on the Bureau of Standards testing, that the scientifically stored film would last for six centuries; he took however, as a method of precaution, a duplicate metal film, thin as paper. Inside the crypt are microfilms of the greatest classics, including the Bible, the Koran, the Iliad, and Dante's Inferno. Producer David O. Selznick donated an original copy of the script of 'Gone With the Wind.' There are more than 640,000 pages of microfilm from over eight hundred works on the arts and sciences. Peters also used similar methods for capturing and for storing still and motion pictures. Voice recordings of political leaders such as Hitler, Stalin, Mussolini, Chamberlain, and Roosevelt were included, as were voice recordings of Popeye the Sailor and a champion hog caller. To view and to hear these picture and sound records, Peters placed in the vault electric machines, microreaders, and projectors. In the event that electricity would not be in use in 8113 A.D., there is in the crypt a generator operated by a windmill to drive the apparatus as well as a seven power magnifier to read the microbook records by hand. The first item one would see upon entering the chamber is a thoughtful precaution-a machine to teach the English language so that the works would be more readily decipherable if found by people of a strange tongue.

"Thornwell Jacobs envisioned the crypt as a synoptic compilation and thus aimed for a whole 'museum' of not only accumulated formal knowledge of over six thousand years, but also 1930s popular culture. The list of items in the crypt is seemingly endless. All of the items were donated, with contributors as diverse as King Gustav V of Sweden and the Eastman Kodak Company. Some of the more curious items Peters included in the crypt were plastic toys - a Donald Duck, the Lone Ranger, and a Negro doll, as well as a set of Lincoln Logs. Peters also arranged with Anheuser Busch for a specially sealed ampule of Budweiser beer. The chamber of the crypt when finally finished in the spring of 1940, resembled a cell of an Egyptian pyramid, cluttered with artifacts on shelves and on the floor" (http://www.oglethorpe.edu/about_us/crypt_of_civilization/history_of_the_crypt.asp, accessed 04-22-2011).