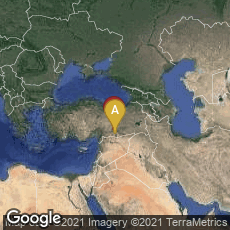 Göbekli Tepe (Turkish for "Potbelly Hill"), a hilltop sanctuary erected on the highest point of an elongated mountain ridge some 15 km northeast of the town of Şanlıurfa (formerly Urfa / Edessa) in southeastern Turkey, is the earliest surviving human-made place of worship, and the earliest surviving religious site in general. It was discovered in 1964; excavations began in 1994.

The site was erected by hunter-gatherers in the 10th millennium BCE, before the advent of the transition from nomadic to permanent year-round settlement. Together with Nevalı Çori, a site dating from the ninth or tenth millenium BCE, but which was inundated by the dammed waters of the Euphrates, Göbekli Tepe has revolutionized understanding of the Eurasian Neolithic.

"Göbekli Tepe is regarded as an archaeological discovery of the greatest importance since it profoundly changes our understanding of a crucial stage in the development of human societies. It seems that the erection of monumental complexes was within the capacities of hunter-gatherers and not only of sedentary farming communities as had been previously assumed. In other words, as excavator Klaus Schmidt puts it: 'First came the temple, then the city.' This revolutionary hypothesis will have to be supported or modified by future research" (Wikipedia article on Göbekli Tepe, accessed 05-18-2011).

Spectacular renderings and photographs of the site are in Mann, "Göbekli Tepe," National Geographic 219, no. 6, 39-59.