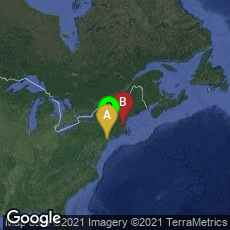 "Turn on, Tune in, Drop Out": The New York Public Library Buys the Timothy Leary Papers In June 2011 it was announced that the New York Public Library purchased the library and papers of psychologist, writer and "psychodelic explorer" Timothy Leary for $900,000.

"A hugely controversial figure during the 1960s and 1970s, he defended the use of the drug LSD for its therapeutic, emotional and spiritual benefits, and believed it showed incredible potential in the field of psychiatry. Leary also popularized the phrase 'Turn on, tune in, drop out'. Both proved to be hugely influential on the 1960s counterculture. Largely due to his influence in this field, he was attacked by conservative figures in the United States, and described as 'the most dangerous man in America' by President Richard Nixon" (Wikipedia article on Timothy Leary, accessed 06-16-2011).

That an establishment institution would acquire Leary's papers at a significant cost shows both the insight of the acquisitions committee of the institution, and the relatively short time in which it took society to appreciate Leary's central role in the historically significant aspects of the 1960s-1970s counterculture.