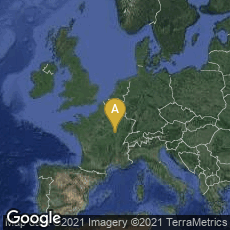 Image Source: en.wikipedia.org
"Vercingetorix throws down his arms at the feet of Julius Caesar. Painting by Lionel Royer. The painting depicts the surrender of the Gallic chieftain after the Battle of Alesia (52 BC). The depiction of Gauls with long hair and mustaches is also called into question today. The horse is a Percheron, although at this time this breed was not in Gaul. The rectangular shield also does not accord with the time when they were mostly oval. As well as this, the depiction of the soldiers in the 'Lorica Segmentata' armour is not accurate for the period - as standard issue Legionary uniform were the 'Lorica Hamata' used in the late Republican Period."  Crozatier Museum , Le Puy-en-Velay

From 58 to 51 BCE Roman proconsul Julius Caesar waged a series of military campaigns called the Gallic Wars against several Gallic tribes. The Gallic Wars culminated in the decisive Battle of Alesia in 52 BCE, in which a complete Roman victory resulted in the expansion of the Roman Republic over the whole of Gaul. The battle of Alesia also marked marked the definitive conquest of the Continental Celtic people by the Roman Republic, and the end of Celtic dominance in France, Belgium, Switzerland and Northern Italy.

"In 52 BC another, larger revolt erupted in Gaul, led by Vercingetorix. Vercingetorix managed to unite the Gallic tribes and proved an astute commander, defeating Caesar in several engagements, but Caesar's elaborate siege-works at the Battle of Alesia finally forced his surrender. Despite scattered outbreaks of warfare the following year, Gaul was effectively conquered. Plutarch claimed that the army had fought against three million men during the Gallic Wars, of whom 1 million died, and another million were enslaved. The Romans subjugated 300 tribes and destroyed 800 cities. However, in view of the difficulty in finding accurate counts in the first place, Caesar's propagandistic purposes, and the common exaggeration of numbers in ancient texts, the totals of enemy combatants are likely to be too high" (Wikipedia article on Julius Caesar, accessed 06-17-2011).