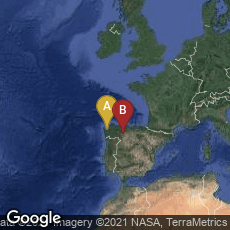 Formerly attributed to Pope Callixtus II, but now believed to have been arranged by the French scholar, monk and pilgrim Aymeric Picaud, the Codex Calixtinus was intended as an anthology of background detail and advice for pilgrims following the Way of St. James to the shrine of the apostle Saint James the Great, located in the cathedral of Santiago de Compostela, Galicia, Spain.

The codex is alternatively known as the Liber Sancti Jacobi, or the Book of Saint James. It includes sermons, reports of miracles and liturgical texts associated with Saint James, and a most interesting set of polyphonic musical pìeces. The Codex Calixtinus was intended to be chanted aloud, and contains the first known composition for three voices, the conductus Congaudeant catholici (Let all Catholics rejoice together); however, the extreme dissonance encountered when performing all three voices together has led some scholars to suggest that this was not the original intention. The popularity of the music has continued to the present day with modern recordings commercially available. It also contains descriptions of the pilgrimage route, works of art to be seen along the way, and the customs of the local people.

"The origins and authorship of the Codex Calixtinus have been the subject of much debate amongst scholars. It is generally believed to have been written by a number of different authors and then compiled as a single volume, possibly between 1135 and 1139 by the French scholar Aymeric Picaud. It is thought that in order to lend authority to their work, the authors prefaced the book with a forged letter purportedly signed by Pope Callixtus II, who had already died in 1124.

"The earliest known edition of the codex is that held in the archives of the Cathedral of Santiago de Compostela,[2] and dates from about 1150. It was lost and forgotten for many years until rediscovered in 1886 by the Jesuit scholar Padre Fidel Fita. A copy of the Santiago edition was made in 1173 by the monk Arnaldo de Monte,[3] and is known as The Ripoll (after the monastery of Santa Maria de Ripoll in Catalonia). It is now kept in Barcelona. The book was well-received by the Church of Rome, and copies of it were to be found from Rome to Jerusalem, but it was particularly popular at the Abbey of Cluny.

"The first full transcription of the Codex was done in 1932 by Walter Muir Whitehill, and published in 1944 in Madrid by the Spanish Consejo Superior de Investigaciones Científicas, together with a musicological study by Silos's Dom Germán Prado O.S.B., and another on the miniature illustrations by Jesús Carro García" (Wikipedia article on Codex Calixtinus, accessed 07-07-2011).

The manuscript was preserved in the Cathedral of Santiago de Compostela. On July 5, 2011 it disappeared from a safe in the archives of the Cathedral. The theft was under investigation when I wrote this entry on July 7, 2011.

♦ On July 8, 2011 an article appeared on theolivepress.es concerning the left: http://www.theolivepress.es/spain-news/2011/07/07/codex-calixtinus-stolen-from-santiago-de-compostela-cathedral/, accessed 07-07-2011.

♦ On July 4, 2012, one day less than a year from the day it was announced stolen, the Codex Calustinus was recovered from a garage in Santiago. A former caretaker and his wife, son, and another women were arrested by Spanish police in connection with the theft.