Image Source: upload.wikimedia.org
Folio 127 verso from Bibliothèque nationale, MS cod. fr. 854. This is the complete leaf on which the portrait of Uc appears. 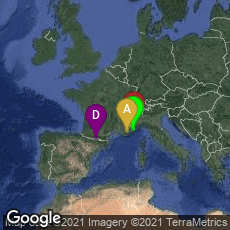 Perhaps the First Grammar of a Romance Language Image Source: commons.wikimedia.org
Uc's portrait in an historiated letter in a medieval manuscript of vidas, some of which he wrote. From Bibliothèque Nationale, MS cod. fr. 854. Numerous images from this manuscript are available from the Wikipedia. Those specifically relevant are at this link: Uc de Saint Circ

Troubadours (Occitan pronunciation: [tɾuβaˈðuɾ], originally [tɾuβaˈðoɾ], English /ˈtruːbədʊər/, French: [tʁubaduːʁ]) were composers and performers of Occitan lyric poetry during the High Middle Ages (1100–1350).  Uc is considered the "inventor" (trobador) of troubadour poetry. It is thouight that he may have taken the name "Faidit" (exiled or dispossessed) during his exile in Italy during the Albigensian Crusade. This grammar of the Occitan language may have been first grammar of an Romance language.

Occitan, a romance language spoken in southern France, Italy's Occitan Valleys, Monaco, and Spain's Val d'Aran-- the regions sometimes known informally as Occitania-- is also spoken in the linguistic enclave of Guardia Piemontese (Calabria, Italy). It is an official language in Catalonia (Spain) (known as Aranese in Val d'Aran). Modern Occitan is the closest relative of Catalan.

The manuscript was first published in print in 1840.  A "revised, corrected and considerably augmented" edition by François Guesnard entitled Grammaires provençales appeared in Paris in 1858.