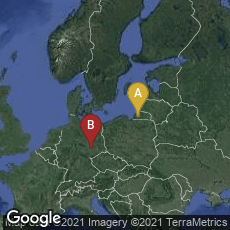 In 1827 Baltic German naturalist, embryologist, geologist, geographer, meteorologist and explorer Karl Ernst von Baer, professor of zoology at  Albertus-Universität Königsberg (then part of the Russian Empire), published De ovi mammalium et hominis genesi epistolam ad Academiam Imperialem Scientiarum Petropolitanam in Leipzig. The pamphlet of 25 leaves with one hand-colored engraved plate after drawings by the author was written in the form of a letter to the Imperial Academy of Sciences in St. Petersburg, of which von Baer was a corresponding member.

In the spring of 1827, while examining the ovaries of a pregnant bitch, Baer became the first to identify the true mammalian egg in the ovary, thus ending a search that had begun at least as early as the 17th century with the investigations of William Harvey and Regnier de Graaf.

In von Baer’s own words, “when I observed the ovary . . . I discovered a small yellow spot in a little sac, then I saw these same spots in several others, and indeed in most of them—always in just one little spot. How strange, I thought, what could it be? I opened one of these little sacs, lifting it carefully with a knife onto a watchglass filled with water, and put it under the microscope. I shrank back as if struck by lightening, for I clearly saw a minuscule and well developed yellow sphere of yolk” (quoted in Baer, “On the Genesis of the Ovum of Mammals and Man,” tr. O’Malley, Isis 47 [1956] 120).

Continuing his investigations, Baer found eggs in a number of other mammals, and thus concluded that “every animal which springs from the coition of male and female is developed from an ovum, and none from a simple formative liquid” (ibid, 149).