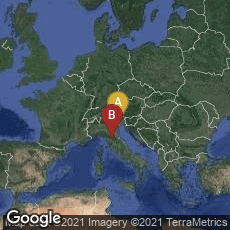 In Due Trattati, uno Intorno alle Otto Principali Arte dell'Oreficieria. L'Altro in Materia  dell'Arte della Scultura.... issued in Florence in 1568 Italian goldsmith, sculptor, painter, soldier and musician Benvenuto Cellini presented One of the few original treatises on Renaissance artistic techniques. The only book by Cellini published during his lifetime, it described Cellini's methods in a way analogous to Leonardo da Vinci's Trattato della Pittura (1561), but unlike Leonardo's work, which was compiled posthumously from various manuscripts by Leonardo, Cellini dictated his treatise himself. Chiefly Cellini is remembered for the autobiography that he dictated to an amanuensis between 1558 and 1562, but which remained unpublished until 1728.

In October 1898 Cellini's Due Trattati was issued in English translation by English entrepreneur and designer Charles Robert Ashbee from Cellini's original manuscript in the Bibliotheca Nazionale Marciana, Venice, rather than from the 1568 edition, which was abridged, as The Treatises of Benventuo Cellini on Goldsmithing and Sculpture. Ashbee was also the founder of the Guild & School of Handicraft, much of the efforts of which were in jewelry, coppersmithing and ironwork. 600 copies were printed by Ashbee's Essex House Press by printers from William Morris's then defunct Kelmscott Press, using the original Kelmscott presses, type, and handmade paper. However, the edition contained finely engraved photo-realistic illustrations, and its format, style and cloth binding was distinctly Essex House rather than Kelmscott.