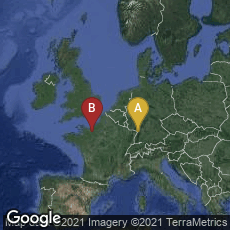 A: Au am Rhein, Baden-Württemberg, Germany, B: Champosoult, Normandie, France

An Ivory Booklet with Scenes of the Passion An ivory booklet preserved in the Metropolitan Museum of Art may be one of the rarest forms of medieval books. The booklet was carved in Northern France circa 1300 and painted, and gilded in the Upper Rhine circa 1310-1320.

"Secular examples were common, but tablets with religious subjects were extremely rare and are known primarily from surviving inventories. The exterior covers of this unusual booklet show scenes of the passion and death of Christ, while the interior covers present scenes of the Virgin. Two of the interior "pages" include painted images added at a later date; these spaces originally must have been intended for some other purpose. All the other interior panels have raised edges, creating a recess for wax that the book's owner could incise with a stylus. The wax tablets within might have contained prayers of intercession or the litanies of saints" (http://www.metmuseum.org/toah/works-of-art/1982.60.399, accessed 10-25-2011).