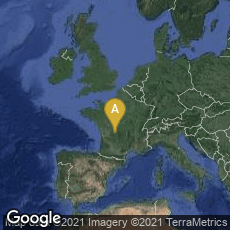 The earliest known textual reference to the enamels produced in the city of Limoges, France, from the twelfth through fourteenth centuries concerns a book cover seen in the Abbey of Saint Victor in Paris in the 1160s and intended for an English abbot.

Though this book cover seems not to have survived, it might have been similar in some ways to a cover preserved in the Metropolitan Museum which dates from circa 1185 to 1210.

"Plaques showing Christ in majesty surrounded by symbols of the evangelists, usually paired with a plaque showing the Crucifixion, were produced in large numbers by Limoges enamelers. The variety of textures and patterns created through the masterful engraving and stippling of the five appliqué figures make this a particularly noteworthy example of a product for which Limoges artists were widely recognized and admired" (http://www.metmuseum.org/toah/works-of-art/17.190.757, accessed 10-25-2011).