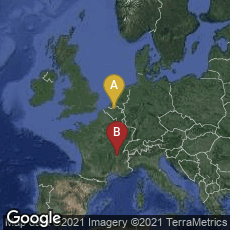 In 1557 typographer Robert Granjon published Dialogue de la vie et de la mort by Innocenzo Ringhieri, translated by Jean Louveau, in Lyon, France.  This was the first book set in a new script type cut by Granjon to which he gave the name Lettre françoise.  The type, based upon French cursive gothic letters of the 16th century, became known as civilité from the titles of early books in which it was used: La civilité puerile by Erasmus, published by Jean Bellère in Antwerp, 1559, and various adaptations.

The type seems to have been applied to books on civilité (manners) for the education of children since it was believed that children should learn to read from a book printed in type that resembled current handwriting.

Between 1557 and 1562 Granjon printed twenty books in what came to be known as civilité type, and other printers had typefaces cut that were similar. The type continued to be used, primarily for these purposes, to the mid-19th century.  Using the type was problematic because many ligatures were required and some letters had more than one variant.