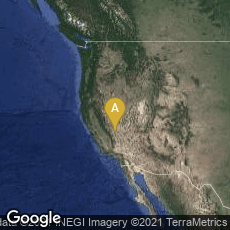 The oldest non-clonal, acknowledged living organism is the Great Basin bristlceone pine Pinus longaeva located in the Ancient Bristlecone Pine Forest in the White Mountains of Inyo County in eastern California. One member of this species, the location of which has not been specifically identified, is estimated to have germinated in 3051 BCE, making it 5064 years old in 2014.

In 1964 Donald R. Currey, a student of the University of North Carolina taking core samples of bristlecone pines, discovered "Prometheus" in the Snake Range of eastern Nevada, in a cirque below Wheeler Peak. Currey's coring tool broke and, regrettably the U.S. Forest service granted permission to cut down "Prometheus." 4,844 rings were counted on a cross-section of the tree, making "Prometheus" at least 4,844 years old, and the oldest known non-clonal living thing.

"A specimen of this species, located in the White Mountains of California was measured by Tom Harlan to be 5,062 years old in 2012. The identity of the specimen is being kept secret by Harlan. This is the oldest known tree in North America, and the oldest known individual tree in the world, although a clonal individual, nicknamed "Old Tjikko", a Norway spruce in Sweden is 9,550 years old.

"The previously oldest named specimen of this species, "Methuselah", is also located in the Ancient Bristlecone Pine Forest of the White Mountains. Methuselah is 4,844 years old, as measured by annual ring count on a small core taken with an increment borer. Its exact location is also kept secret.

"Among the White Mountain specimens, the oldest trees are found on north-facing slopes, with an average of 2,000 years, as compared to the 1,000 year average on the southern slopes. The climate and the durability of their wood can preserve them long after death, with dead trees as old as 7,000 years persisting next to live ones" (Wikipedia article on Pinus lagaeva, accessed 11-09-2014).