"The other side of the first polymer note symbolised the original discovery and settlement of Australia some 40–60,000 years earlier. It depicts an Aboriginal youth, a Morning Star Pole and other designs including from Aboriginal artworks commissioned by the Bank." 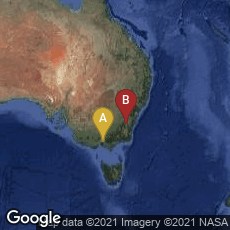 "One side of the note symbolised European settlement with HMS Supply, the first ship to drop anchor in Sydney Cove, and a medley of persons symbolising all who have contributed to Australia's development since 1788."

The world's first polymer banknote was the $10 commemorative note issued in January 1988 to commemorate the Australian Bicentenary. It was developed by the Reserve Bank of Australia (RBA), Commonwealth Scientific and Industreal Research Organisation (CSIRO), and The University of Melbourne.

Made from the polymer, biaxially-oriented polypropylene (BOPP), these notes incorporate security features difficult to include in paper bank notes. They are also more durable, harder to tear, more resistant to folding, more resistant to soil, waterproof and washing machine proof, easier to process by machine, and are shreddable and recyclable at the end of their useful lives, which are 4-5 times longer than paper banknotes.

"The traditional printed security features applied on paper can also be applied on polymer. These features include intaglio, offset and letterpress printing, latent images, micro-printing, and intricate background patterns. Polymer notes can be different colours on the obverse and reverse sides. Like paper currency, polymer banknotes can incorporate a watermark (an optically variable 'shadow image') in the polymer substrate. Shadow images can be created by the application of Optically Variable Ink (OVI) enhancing its fidelity and colour shift characteristics. Security threads can also be embedded in the polymer note; they may be magnetic, fluorescent, phosphorescent, microprinted, clear text, as well as windowed. Like paper, the polymer can also be embossed.

"Polymer notes also enabled new security features unavailable at the time [1988] on paper, such as transparent windows, and diffraction grating. Since 2006 however the development of the paper transparent window technologies by De La Rue (Optiks) and G&D (Verify) have reduced that advantage" (Wikipedia article on polymer banknote, accessed 11-21-2011).