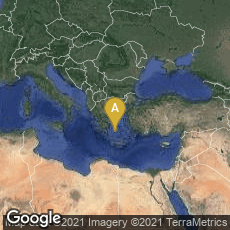 The Greek Origin of Monumental Roman Stone Inscriptions, According to Stanley Morison The gravestone c. 550 BCE at Delos to which Stanley Morison referred as reproduced in his classic book.

In his classic series of lectures, Politics and Script, delivered in 1957, typographer and historian of typography and calligraphy Stanley Morison traced the monumental stone inscriptions of the Romans, from which many of the classic Roman typefaces descend, to a gravestone from Melos (Milos), Greece, that dates to the mid-5th century BCE.  He wrote concerning an inscription carved in marble on a gravestone from Melos preserved in the Staatliches Museum, Berlin (I.G. xii. 3. 1130) that

"the shapes of its letters are those upon which all others depend. It will be seen that they are 'square'. That is not to say that the letters are all perfectly square, but they may be said to be generally 'square' in comparison with handwriting. This is the only sense in which it can be said that Greek, and for that matter Latin, letters are 'quadrate'. It must be noted that, although in the still earlier inscriptions this could not be said, from the sixth century and throughout the classical period it became the rule.

"There are four primary characteristics of early Greek letter design in the classical period. First, the apparent squareness of the shapes; secondly, the unformity of the stroke; thirdly, the consistence of the complete structure; lastly, the rationality of the shapes in having no unnecessary parts and nothing supurfluous. Thus the script is square, unform, rational, and perfectly functional. . . .

"In describing the scripts and letterings of later periods, different places and other languages, reference will be made to relative plainness of design and equality of width of stroke. If the stroke in the Melos inscriptions appears to us as 'thin' it must be considered that it looks so to us because we are accustomed to a thicker stroke. Among Greeks of the sixth or fifth century B.C. the stroke that we may consider thin was normal. The Latins, as will be seen, used a different method of stroking. This does not yet concern us except to remember constantly that is the Latin stroke that is normal to us in the West. The main element in the design, however, is not the stroke's width but its uniformity. The Greek stroke is not merely thin (for it can be thickened) but it is invariably uniform. This is the first great distinction of fundamental importance to the criticism and classification of Graeco-Roman scripts" (Morison, Politics and Script. Aspects of authority and freedom in the development of Graeco-Latin script from the sixth century B.C. to the twentieth century A.D. The Lyell Lectures 1957. Edited and Completed by Nicolas Barker [1972] 5-7, plate 1 ).