Vol. 6 of the Maurdramnus Bible, leaf 3 recto. This leaf appears to be a 12th century replacement for what must have been a leaf missing from the codex by that time. (Thanks to Ittai Gradel for dating this leaf.) Vol. 7, 1 recto, a Carolingian leaf from the Maurdramnus codex. 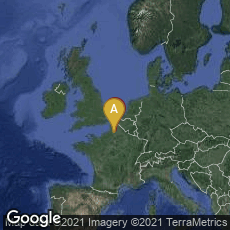 The Maurdramnus Bible, the Earliest Datable Application of Carolingian Minuscule The Maurdramnus Bible was commissioned between 772 and 781 by Abbot Maurdramnus of Corbie probably in 12 or 13 volumes, of which 5 volumes survived in the Bibliothèque municipale d'Amiens (MSS 6, 7, 9, 11, 12) and a portion of a sixth volume survived in the Bibliothèque nationale de France (Lat. 13174). This manuscript was written in the first datable Carolingian minuscule.

" . . .the script of Maurdramnus Bible is a consistent development of Miniscule, more directly out of Half-Uncial even than the earliest writing at Corbie between 750 and 758 practised under Leutchar. . . It begins on the grand scale for the Pentateuch and [the script] was reduced in size as the work proceeded. As the colophon (mentioning Maurdramnus) occurs at the end of Maccabees, it is more than plausible to say that the work consisted of the Old Testament only. . . ." (Morison, Politics and Script. . . . Barker ed. [1972] 132-33, pl. 87).

Because the script employed in the Maurdramnus Bible has its own character it is sometimes identified as "Maurdramnus Script."