"Introductory Apple 1 Computer advertisement published in the October 1976 issue of Interface Age magazine, with detailed, and very interesting explanatory text and photograph. This issue also had an article titled "Interfacing the Apple Computer" by Steve Jobs. This described how to connect the Southwest Technical Products PR-40 printer to an Apple 1. (This same ad was also in the September issue.) Note the computer pictured is labeled "Apple Computer 1". (Wikipedia) 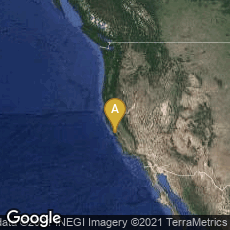 An Apple 1 at the Computer History Museum, Mountain View.

Steve Wozniak demonstrated the first Apple Computer that he designed and hand-built at the Homebrew Computer Club in Menlo Park, California in July 1976.
The computer became known retrospectively as the Apple I. Wozniak's friend Steve Jobs had the idea of manufacturing the computer for sale. Together they founded the Apple Computer Company, and to finance the production of their first product Jobs sold his only means of transportation, a VW van, and Wozniak sold his HP-65 calculator for $500. They built the Apple I in the garage of Jobs's parents' house in Palo Alto.

"The Apple I went on sale in July 1976 at a price of US $666.66, because Wozniak liked the repeating digits and because they originally sold it to a local shop for $500 for the one-third markup. About 200 units were produced. Unlike other hobbyist computers of its day, which were sold as kits, the Apple I was a fully assembled circuit board containing about 60+ chips. However, to make a working computer, users still had to add a case, power supply transformers, power switch, ASCII keyboard, and composite video display. An optional board providing a cassette interface for storage was later released at a cost of $75" (Wikipedia article on Apple I, accessed 11-26-2011).

♦ Of the approximately 200 Apple 1s built, 43 were thought to survive in 2012.  Of those six were then thought to be in working order. For sales of original examples beginning in 2010 see the related database entry.