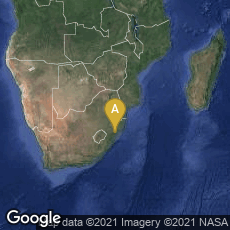 From Sibudu Cave: the Earliest Known Creation and Use of Compound Adhesives, Suggesting Complex Cognition

Stone tools (segments) with adhesive from Sibudu Cave.  Segment with red ochre visible to the naked eye as well as microscopic views of red ochre and plant gum on the tool. (Click on image to view larger.)

Archaeologist Lyn Wadley of the University of the Witwatersrand, Johannesburg, South Africa, and team published "Implications for complex cognition from the hafting of tools with compound adhesives in the Middle Stone Age, South Africa," Proceedings of the National Academy of Sciences of the United States of America (PNAS) June 16, 2009 vol. 106 no. 24 9590-9594, doi: 10.1073/pnas.0900957106.

At Sibudu Cave, in a sandstone cliff in northern KwaZulu-Natal, South Africa, a site occupied, with some gaps from circa 75,000 BCE to 33,000 BCE, evidence was found of some of the earliest examples of modern human technology. The complexity of heat-treated mixed compound gluing found in this cave has been presented as evidence of continuity between early human cognition and that of modern humans.

Quoting from the beginning of Wadley's paper (footnotes removed):

"Archaeologists often use symbolic material culture as a marker of modern behavior, but few agree on definitions of either term or explore the types of mental architecture required for symbolic innovations. Here, we move away from the contentious issue of symbolism and draw on the combined expertise of cognitive and earth scientists to create a fresh way of recognizing, in the deep past, cognitive abilities that overlap with our own. People today have a capacity for novel, sustained multilevel operations; this ability may have arisen from neural connectivity in part of the prefrontal cortex. The capacity may be recognizable in some technologies, and we use compound adhesive manufacture as our example. To demonstrate complex cognition, we must show that some executive steps required for compound adhesive manufacture are not possible without mental abilities of the kind implied in the ninth subsystem of the Barnard et al. model of mental architecture. Here, abstract meanings and sophisticated organization of action sequences determine decision making. An earlier eighth subsystem would have been mentally incapable of processing 2 levels of meaning simultaneously or of generating fully abstract concepts about behavior.

"The use of simple (1-component) adhesives is ancient; for example, birch-bark tar was found on 2 flakes from ≈200,000 years (200 ka) ago at a site in Italy. At ≈40 ka, bitumen was found on stone tools in Syria, and a similarly aged site in Kenya yielded tools with red ochre stains that imply the use of multicomponent glue. Traces of even earlier (≈70 ka) compound adhesives occur, together with microfractures consistent with hafting, on Middle Stone Age (MSA) stone tools from Sibudu Cave, South Africa (see SI Text and Table S1). Several recipes are evident: sometimes plant gum and red ochre (natural iron oxide–hematite–Fe2O3) traces occur on tool portions that were once inserted in hafts. Other tools have brown plant gums and black or white fat, but no ochre. . . .

"Hunters' lives depend on reliable weapons. This dependency would have been a powerful incentive in the past to create trustworthy adhesives for composite weapons. Our experiments intimate that by at least 70 ka (and earlier evidence may eventually be found at sites other than Sibudu) people were competent chemists, alchemists, and pyrotechnologists. We propose that these artisans were exceedingly skilled; they understood the properties of their adhesive ingredients, and they were able to manipulate them knowingly.

"Although we have devoted much time to discussing the mechanical and chemical effects of adding ochre to plant gum for the creation of compound adhesives, we have done so to highlight the behavioral implications of this technology. We shall never know for sure whether the process of creating compound adhesive from disparate ingredients was regarded as symbolic in the past. However, our familiarity with compound adhesive manufacture from natural ingredients helps us make interpretations about the type of cognition that the early artisans must have had. Some birds and wasps also create compound adhesives, but they do so instinctively with simply coded operational sequences, “cognigrams,” in which the distance between problem and solution is far smaller than that demonstrated by the human action of making a composite hunting weapon. One obvious difference in human manufacture of compound glue is the use of pyrotechnology. Temperature control depends on understanding wood types, their moisture contents, and their propensity to form long-lasting coals. Vigilance is essential because our adhesives burned, or boiled to form air bubbles, when they were too close to the fire. Overdehydration caused loss of cohesiveness, whereas boiling adhesive created weakness.

"The glue maker needs to pay careful attention to the condition of ingredients before and during the procedure and must be able to switch attention between aspects of the methodology. To hold many courses of action in the mind involves multitasking, which is one trait of modern human minds, notwithstanding that even today, some people find multilevel operations difficult. On-the-spot compensations have to be made for the capricious character of natural ingredients. Viscosity of Acacia gums varies, demanding different quantities of loading agent. Powdered ochres are also inconsistent: even when they are visually similar because of red staining by minute quantities of hematite, which has pervasive pigmenting capacity, they can be dissimilar with respect to Fe and Si percentages, particle size, pH, and ZP. Thus, ongoing evaluation and control of texture, viscosity, plasticity, and temperature is required; no set recipe or routine can guarantee a satisfactory adhesive product.

"Mental flexibility is not the only complex attribute implied by our experiments. Artisans living in the MSA must have been able to think in abstract terms about properties of plant gums and natural iron products, even though they lacked empirical means for gauging them. Qualities of gum, such as wet, sticky, and viscous, were mentally abstracted, and these meanings counterpoised against ochre properties, such as dry, loose, and dehydrating. Simultaneously, the artisan had to think about the correct position for placing stone inserts on the hafts. Successful mental rotation requires advanced working memory capacity  and, in turn, complex cognition. Capacity for multilevel operations, abstract thought, and mental rotation are all required for the process of compound adhesive manufacture. Although fully modern behavior is presently recognizable relatively late in the MSA, the circumstantial evidence provided here implies that people who made compound adhesives in the MSA shared at least some advanced behaviors with their modern successors."