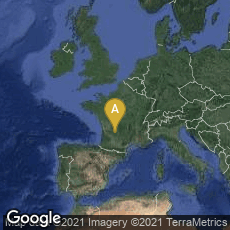 Rouffignac is notable for its proportion of representations of mammoths.

In his translation of the Cosmographia of Sebastian Münster called La Cosmographie universelle de tout de monde published in 1575 French author, poet, and translator François de Belleforest described explorations of Rouffignac Cave, within the French commune of Rouffignac-Saint-Cernin-de-Reilhac in the Dordogne département, and mentioned "paintings and animal traces."  Rouffignac Cave contains over 250 engravings and animal paintings dating back to the Upper Paleolithic. Though De Belleforest wrote centuries before there was any understanding of prehistory, his comment is one of the earliest references to cave exploration.