Drawing of wheeled cart. (Click on image to view larger.) 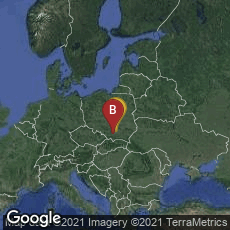 The Earliest Images of a Wheeled Vehicle

Evidence of wheeled vehicles appears from the mid 4th millennium BCE in Mesopotamia, the Northern Caucasus (Maykop culture) and Central Europe, so the question of which culture originally invented the wheeled vehicle remains unresolved.

The earliest well-dated image of a wheeled vehicle, radiocabon dated to 3500-3350 BCE, is on the Bronocice pot, a Funnelbeaker culture ceramic vase discovered in 1976 during the archaeological excavation of a large Neolithic settlement in Bronocice by the Nidzica River, circa 50 km north-east of Kraków.  The vase is preserved in the Archaeological Museum in Kraków.

Images on the Bronice pot include five rudimentary representations of what seems to be a wagon. They represent a vehicle with a shaft for a draught animal, and four wheels. The lines connecting them probably represent axles. The circle in the middle possibly symbolizes a container for harvest. These images suggest the existence of wagons in Central Europe as early as in the 4th millennium BCE. The wagons were presumably drawn by aurochs, ancestors of domestic cattle, whose remains were found with the pot. Their horns were worn out as if tied with a rope, possibly a result of using a kind of yoke,

Other images on the pot include a tree, a river and what may be fields intersected by roads or ditches or the layout of a village.