Based on image in Van Vuure, C. (2005) Retracing the Aurochs: History Morphology and Ecology of an Extinct Wild Ox. Pensoft Publishers. Sofia-Moscow.  (Click on image to view larger.)

Illustration from Sigismund von Herberstein's book published in 1556 captioned: "I am 'urus', tur in Polish, aurox in German (dunces call me bison) [lit. (the) ignorant (ones) had given me the name (of) Bison"; Latin original: Urus sum, polonis Tur, germanis Aurox: ignari Bisontis nomen dederant. (Click on image to view larger.)

Mounted skeleton of a putative female auroch in the National Museum of Denmark in Copenhagen. (Click on image to view larger.) 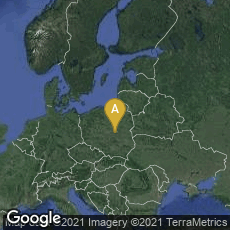 Domestication of the Aurochs, Ancestors of Domestic Cattle

Domestication of the aurochs (urus, Bos primigenius), a type of large wild cattle which evolved in India about two million years ago, and migrated to Asia, and North Africa, reaching Europe about 250,000 years ago, is thought to have occurred in several parts of the world about 6000 BCE.

"The aurochs was regarded as a challenging hunting quarry animal, contributing to its extinction. The last recorded aurochs, a female, died in 1627 in the Jaktorów Forest, Poland, and her skull is now the property of the Livrustkammaren ("Royal Armory") museum in Stockholm, Sweden.

"Representations and descriptions of aurochs appear in prehistoric cave paintings, in Julius Caesar's The Gallic War, and as the national symbol of many European countries, states and cities such as Alba-Iulia, Kaunas, Romania, Moldavia, Turka, Mecklenburg, and Uri. The Swiss canton Uri was named after this animal species" (Wikipedia article on Aurochs, accessed 12-25-2011).