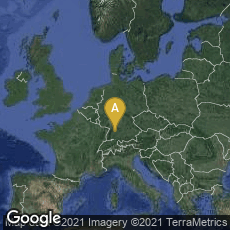 In 1869, while working at Felix Hoppe-Seyler's laboratory at the University of Tübingen, Germany, Swiss physician and biologist Johannes Friedrich Miescher  isolated a new class of compounds rich in organic phosphorous from the nuclei of white blood cells. These he called nuclein (nuclear protein). In 1871 Miescher published this discovery in "Ueber die chemische Zusammensetzung der Eiterzellen,"  Hoppe-Seyler, Felix, ed., Med.-chem. Untersuchungen , IV (1866-71) 441-60. Miescher concluded correctly that these "nucleins," were as important a center of metabolic activity as the proteins.

Miescher’s “nuclein” was later demonstrated to be the hereditary genetic material (DNA). He also was the first to suggest the existence of a genetic code.