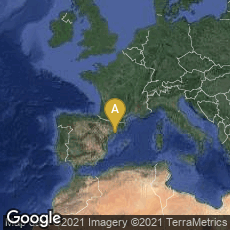 A leaf from the Verona Orational.

The Verona Orational (Verona, Cathedral, Biblioteca Capit. Cod. LXXXIX), also known as the Libellus Orationum, a late 7th or early 8th century Visigothic prayer book, is the only surving liturgical book that was written before the Moorish invasion, and is also the only surviving Visigothic manuscript containing figural decoration. The manuscript has 127 folios that measure 330 mm by 260 mm. The text was written in Visigothic minuscule. A marginal gloss indicates that the manuscript was produced in Tarragona, Spain, at the church of Saint Fructuosus.

"The orational contains antiphons and responsories that are not neumed; no music exists in the codex.

"On folio 3r there is a drawing of the "Rose of the Winds", a precursor of the Compass rose. The drawing depicts the twelve winds grouped around a central cross. The twelve winds are represented by four heads with three faces each that have trumpets coming out of the mouth of each face. Each head is contained within a circle and the four circles are arranged in a cross pattern around the central cross. The entire drawing is enclosed within a double circle. Although the drawing has been Christianized by the addition of the central cross, the drawing is based a well known formula in Classical art, the Vultus trifons" (Wikipedia article on Verona Orational, accessed 01-22-2012).