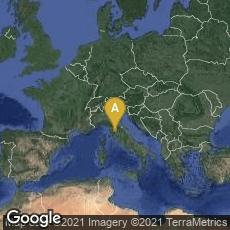 Between 1419 and 1449 Italian administrator, artist and engineer Mariano di Jacopo detto il Taccola of Siena, sometimes called the "Sienese Archimedes," published the illustrated technological treatises De ingeneis and De machinis. These manuscripts were widely studied and copied by artists and engineers during the Renaissance, but never seem to have gained the attention of printers, and were not published in print until the 20th century. Taccola’s original manuscripts, the style of which was more sophisticated than that of their manuscript copies, were rediscovered and identified in the state libraries of Munich and Florence in the 1960s, leading to revival of interest in Taccola and publication of facsimile editions of his manuscripts.

"Taccola left behind two treatises, the first being De ingeneis (Concerning engines), work on its four books starting as early as 1419. Having been completed in 1433, Taccola continued to amend drawings and annotations to De ingeneis until about 1449. In the same year, Taccola published his second manuscript, De machinis (Concerning machines), in which he restated many of the devices from the long development process of his first treatise.

"Drawn with black ink on paper and accompanied by hand-written annotations, Taccola depicts in his work a multitude of 'ingenious devices' in hydraulic engineering, milling, construction and war machinery. Taccola’s drawings show him to be a man of transition: While his subject matter is already that of later Renaissance artist-engineers, his method of representation still owes much to medieval manuscript illustration. Notably, with perspective coming and going in his drawings, Taccola seemed to remain largely unaware of the ongoing revolution in perspective painting. This is the more curious, since he is the only man known to have interviewed the 'father of linear perspectivity' himself, Filippo Brunelleschi. Despite these graphic inconsistencies, Taccola’s style has been described as being forceful, authentic and usually to be relied upon to capture the essential" (Wikipedia article on Taccola, accessed 01-27-2012).