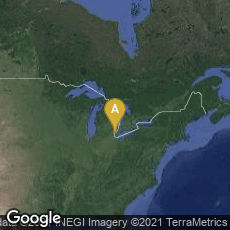 In 1908 American industrialist Henry Ford began development of the assembly line for the Ford Model T. The line became operational in Detroit on December 1, 1913, and fully operational in 1915. Contrary to popular mythology, Ford did not invent the automotive assembly line. That was accomplished by Ransom E. Olds in 1901. (Examples of assembly line production have survived from as early as 215-210 BCE.)

"Despite oversimplistic attempts to attribute it to one man or another, it [Ford's Model T assembly line] was in fact a composite development based on logic that took 7 years and plenty of intelligent men. The principal leaders are discussed below. The basic kernel of an assembly line concept was introduced to Ford Motor Company by William "Pa" Klann upon his return from visiting a Chicago slaughterhouse and viewing what was referred to as the 'disassembly line', where animals were butchered as they moved along a conveyor. The efficiency of one person removing the same piece over and over caught his attention. He reported the idea to Peter E. Martin, soon to be head of Ford production, who was doubtful at the time but encouraged him to proceed. Others at Ford have claimed to have put the idea forth to Henry Ford, but Pa Klann's slaughterhouse revelation is well documented in the archives at the Henry Ford Museum and elsewhere, making him an important contributor to the modern automated assembly line concept. The process was an evolution by trial and error of a team consisting primarily of Peter E. Martin, the factory superintendent; Charles E. Sorensen, Martin's assistant; C. Harold Wills, draftsman and toolmaker; Clarence W. Avery; Charles Ebender; and József Galamb. Some of the groundwork for such development had recently been laid by the intelligent layout of machine tool placement that Walter Flanders had been doing at Ford up to 1908.

'I believe that this was the first moving line ever installed. The idea came in a general way from the overhead trolley that the Chicago packers use in dressing beef.'

Charles E. Sorensen, in his 1956 memoir My Forty Years with Ford, presented a different version of development that was not so much about individual 'inventors' as a gradual, logical development of industrial engineering:

" 'What was worked out at Ford was the practice of moving the work from one worker to another until it became a complete unit, then arranging the flow of these units at the right time and the right place to a moving final assembly line from which came a finished product. Regardless of earlier uses of some of these principles, the direct line of succession of mass production and its intensification into automation stems directly from what we worked out at Ford Motor Company between 1908 and 1913. Henry Ford is generally regarded as the father of mass production. He was not. He was the sponsor of it.'

As a result of these developments in method, Ford's cars came off the line in three minute intervals. This was much faster than previous methods, increasing production by eight to one (requiring 12.5 man-hours before, 1 hour 33 minutes after), while using less manpower. It was so successful, paint became a bottleneck. Only japan black would dry fast enough, forcing the company to drop the variety of colors available before 1914, until fast-drying Duco lacquer was developed in 1926. In 1914, an assembly line worker could buy a Model T with four months' pay.

"The assembly line technique was an integral part of the diffusion of the automobile into American society. Decreased costs of production allowed the cost of the Model T to drop within the budget of the American middle class. In 1908, the price of a Model T was around $825, and by 1912 it had dropped to around $575. This price reduction is comparable to a drop from $15,000 to $10,000 in dollar terms from the year 2000" (Wikipedia article on Assembly Line, accessed 02-16-2012).