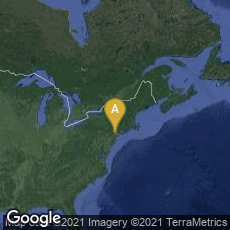 "describes a game of skill in which a player sits or stands facing a cathode ray tube (CRT) video screen mounted in a cabinet. Goldsmith and Mann designed the game to resemble a World War II radar display, but with airplanes or some other targets painted onto a transparent overlay (since this invention preceded the era of computer graphics).

"The player turns a control knob to position the CRT beam on the screen; to the player, the beam appears as a dot, which represents a reticle or scope. The player has a restricted amount of time in which to maneuver the dot so that it overlaps an airplane, and then to fire at the airplane by pressing a button. If the beam falls within the preprogrammed coordinates of a target when the user presses the button, then the CRT beam defocuses, simulating an explosion. . . ." (Wikipedia article on Cathode ray tube amusement device, accessed 02-29-2012).

U.S. Patent 2,455,992 which describes the device, granted to Goldsmith and Estle Ray Mann in December 1948, and assigned to Allen B. DuMont Laboratories, is the earliest patent for an electronic game. The product was never commercially manufactured.