By 1500 Printing Presses are Established in 282 Cities Spread of printing reproduced as a screen shot from The Atlas of Early Printing at atlas.lib.uiowa.edu. 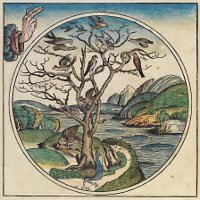 By the year 1500 printing presses were established in 282 cities.

"These are situated in some 20 countries in terms of present-day boundaries. In descending order of the number of editions printed in each, these are: Italy, Germany, France, Netherlands, Switzerland, Spain, Belgium, England, Austria, Czechoslovakia, Portugal, Poland, Sweden, Denmark, Turkey, Croatia, Montenegro, Balearic Islands, Hungary, and Sicily."

"Only about one edition in ten (i.e. just over 3000) has any illustrations, woodcuts or metalcuts. The 'commonest' incunabulum is Schedel's Nuremberg Chronicle ("Liber Chronicarum") of 1493, with c. 1250 surviving copies (which is also the most heavily illustrated). Very many incunabula are unique, but on average about 18 copies survive of each. This makes the Gutenberg Bible, at 48 or 49 known copies, a rather common (though extremely valuable) edition" (Wikipedia article on incunabulum, accessed 12-01-2008).

The average print run of a 15th century printed book has been estimated by some methods of calculation as between 400-500 copies, with as many as 1000 copies, or more, of some books printed. By one method it was estimated that printers issued up to 35,000 different printed works of all kinds, including pamphlets and broadsides as well as books, with a total printed output somewhere around 15 to 20 million copies. Presumably no copies of certain publications—especially ephemera—survived.

♦ In January 2008 the Incunabula Short Title Database maintained by the British Library recorded 29,777 editions printed from moveable type, but not from woodblocks or engraved plates, before 1501. These included  "some 16th-century items previously assigned incorrectly to the 15th century." The number of true incunabula recorded in the database was  27,460— thought to be very close to complete coverage of the number of extant incunabula, which was estimated at 28,000.