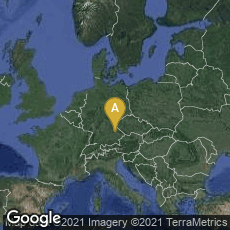 German pastor, botanist, mycologist, entomologist, ornithologist and inventor Jacob Christian Schäffer published Versuche und Muster ohne alle Lumpen oder doch mit enem geringen Zusatze derselben Papier zu machen in six volumes, Regensburg, 1765-71, in which he documented his experiments with new papermaking materials, and included actual specimens of paper made with each.  Because his experiments were conducted prior to the discovery of bleach by Scheele, Berthollet and others, all of Schäffer's samples show the tint of the original material from which they were made. Schäffer's book also probably includes the first documented sample of paper produced from wood pulp—not surprising because Schäffer, an entomologist, studied the production of wood pulp paper by wasps:

"In most of the examples about one-fifth part cotton rags were added to the pulp to help bind the fibres together. A number of the specimens are sized and nearly all have been printed upon.

"It is curious to note one of the first specimens shown in Schaeffer's books was made from wasps' nests–for it was not the wasp, himself, the first papermaker, or was it the frog who was the original fabricator of paper? The wasp made his nest of wood fibre cleverly felted together exactly as paper is constructed, while the frog made a peculiar kind of spittle on the surface of ponds which became well-felted paper after drying naturally in the sun" (Hunter, The Literature of Papermaking 1390-1800 [1925] 34-36.)

Writing in 1925, Dard Hunter described Schäffer's set of books as "the most interesting and rarest work on the subject of paper ever published," and stated that complete copies with all of the 82 original paper specimens were extremely difficult to find.