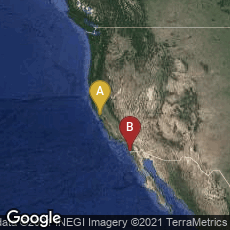 Live stallion of the now-extinct Quagga species of horse at the Royal College of Surgeons, painted by Jacques-Laurent Agasse in the early 1800s

On November 15, 1984 Russell Higuchi, Barbara Bowman, and Mary Freiberger from the Department of Biochemistry at the University of California, Berkeley and Oliver A. Ryder & Allan C. Wilson, of the Research Department, San Diego Zoo, published "DNA sequences from the quagga, an extinct member of the horse family," Nature 312, 282-284; doi:10.1038/312282a0. This was probably the first study of DNA isolated from ancient specimens, or ancient DNA (aDNA).

"To determine whether DNA survives and can be recovered from the remains of extinct creatures, we have examined dried muscle from a museum specimen of the quagga, a zebra-like species (Equus quagga) that became extinct in 1883. We report that DNA was extracted from this tissue in amounts approaching 1% of that expected from fresh muscle, and that the DNA was of relatively low molecular weight. Among the many clones obtained from the quagga DNA, two containing pieces of mitochondrial DNA (mtDNA) were sequenced. These sequences, comprising 229 nucleotide pairs, differ by 12 base substitutions from the corresponding sequences of mtDNA from a mountain zebra, an extant member of the genus Equus. The number, nature and locations of the substitutions imply that there has been little or no postmortem modification of the quagga DNA sequences, and that the two species had a common ancestor 3–4 Myr ago, consistent with fossil evidence concerning the age of the genus Equus."