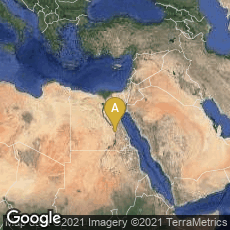 The Archive or Library in the Temple of Edfu The temple of Horus at Edfu.

The Temple of Edfu dedicated to the falcon god Horus, located on the west bank of the Nile in the city of Edfu, which was known in Greco-Roman times as Apollonopolis Magna after the chief god Horus-Apollo, was built in the Ptolemaic period between 237 and 57 BCE. Inscriptions on its walls provide information on language, myth and religion during the Greco-Roman period in ancient Egypt.

In this temple "there is a small room near the court which was used as an archive. The walls show inscriptions concerning 'many chests of books and large leather rolls.' They included all the literature appertaining to a temple; liturgy for daily rites and feast days; manuscripts containing the building plans and instructions for the decorations on the walls of the temple; incantations and priestly lore but also documents relevant to the administration" (Hussein 21).

"Because of the great quantity of extant papyrus rolls, which nevertheless form only a fraction of these existing in ancient times, the question arises as to how and where the Egyptians collected and arranged their books. The texts indicate that papyri were kept because we read that copying was necessary when the original had become worm-eaten. Two institutions could have served as depositories: the 'mansion of books' and the 'mansion of life'. 'Mansion of books' was the designation both for the archives where books were kept and an adminstrative office. . . .The 'mansion of life' was more than a library—it was a kind of university. Here books of all kinds were not only collected and classified, they were also written and handed down to the younger generation. It was the place where all branches of knowledge were cultivated and taught. The term 'mansion of life' also indicated that its prupose was primarily the custodianship of religious texts and the celebration of rites connected with the preservation of the king's life and that of Osiris.

"We are not able to say according to which principles libraries in the 'mansion of books' and in the 'mansion of life' were arranged. But we know. nevertheless, that the collected rolls were listed in catalogues, according to their content, and kept in chests (or other receptacles) on which a tablet with the titles of the books could be fastened or whose covers bore paintings indicating the content of the rolls" (Hussein, Origins of the Book. Egypt's contribution to the development of the book from papyrus to codex [1970] 21-22).